Running a wood shop and a knife shop out of a smallish two-car garage presents many challenges, but the lack of space for all the new tools we “need” is probably the most challenging. An additional challenge is the fact that one of us is a hyper-organized-neat-freak and the other is a pack rat. We recently bought a Rigid spindle sander, and after months of moving it around from work bench to garage floor to the top of the table saw, I just couldn’t take it anymore. It needed a home. Enter: the flip cart. The spindle sander is about the same size as our router table, so the two pieces pair nicely in a flip cart. The only challenge was making a cart with enough clearance to leave the router fence on when inverted, with a final table height workable for a 5’6” individual. The free project plans are at the end of this post.

I borrowed heavily from two guys who posted videos and their flip cart builds on YouTube, and they deserve a bit of attribution for inspiring this project:

Acceptance Criteria For The Design 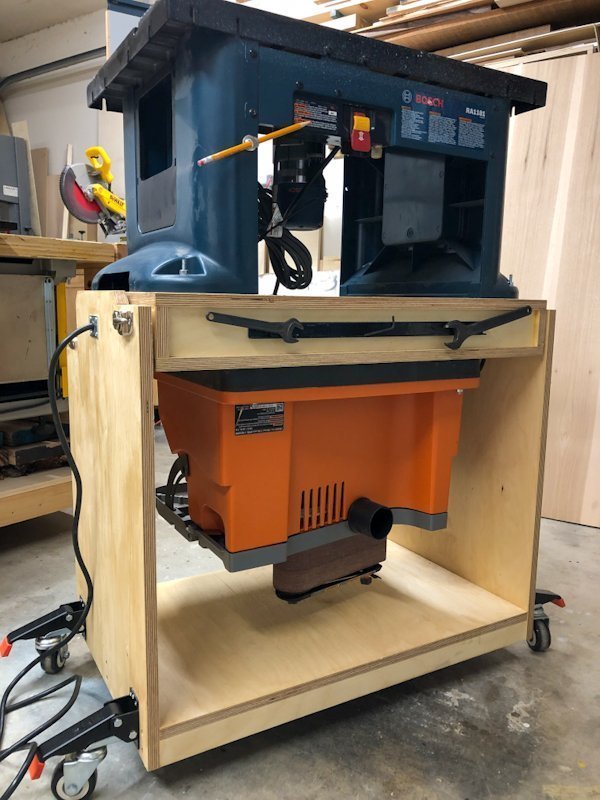 I used one sheet of 3/4” 4×8 Baltic Birch plywood purchased at McKillican. I’ve never seen baltic at a big box store, so if you don’t live near a place with a commercial building supply store, then any 3/4” ply will substitute nicely. Just try to find a piece that’s pretty flat. After creating all of the components in SketchUp, I added the pieces to CutList Optimizer and generated a parts list. We used our Makita Track Saw and Grizzly Table Saw to make all of the cuts.

Measure accurately for all of the parts. The plans include precise measurements and the parts fit tightly. “Close enough” probably won’t do. When marking, I prefer to use my Incra T-Rule and Woodpeckers Edge Rule over a tape measure.

Step 3 - Assemble The Base

Using pocket screws, I assembled all of the base pieces. The base construction might be a bit overdone, but I wanted to prevent racking and provide more weight to the bottom for added stability. There just wasn’t enough room for a drawer at the bottom since I didn’t want to climb a ladder to use the router table. In other situations, I might make the bottom a drawer. 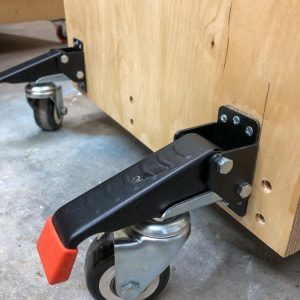 I chose these particular casters because of the total height requirements for the project. They project out from the base quite a bit though. If it weren’t for the height requirement, I would use bottom mount casters. To keep myself from stubbing my toe on the casters, I’m going to add a french cleat storage system to the side panels for storing router bits and sander parts.

Attach the rotating box sides and bottom to each other using pocket screws and glue. Don’t attach the top piece yet! 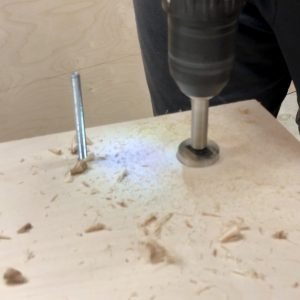 I turned the rotating box base over, centered my spindle sander on it and then marked where the holes should line up to anchor the base to the sander. Then, I drilled 1/4” holes for the anchor bolts. I also marked the optimal place for the sander power cord to pass through into the rotating box, keeping in mind that the edge of the holes needed to be at least 3/4” from the edges. Then we drilled 1” holes to pass the cord through. We epoxied the anchor bolts from the inside so that the sander or router can be removed without dissembling the rotating box. I repeated all of these steps for the router on the top piece of the flip box. 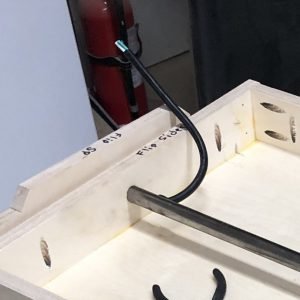 We drilled a 1/2” hole to pass the power cord through about 5 inches from the pipe edge and lined it with a grommet to protect the cord. Then we cut the pipe to the outside width of the assembled side panels.

The 3/4” pipe fits pretty tight so be prepared to hammer it in.  Use some sort of block or cap to prevent mushrooming the end.  We didn’t and that caused us some pain later.  Hammer the pipe into one side of the side panel until 2 washers will fit on the pipe.  Hold op the rotating box and hammer the pipe through both holes until another two washers will fit on the outside of the other end, Then hammer it until it passes through the hole in the other side panel. 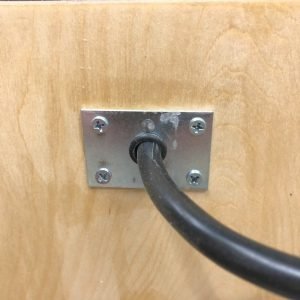 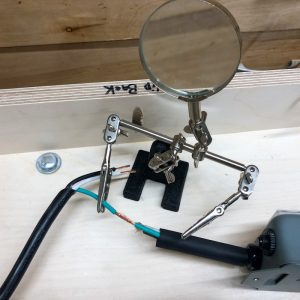 I cut the power strip cord about 6″ from the strip end and then passed the cord through the end of the pipe and the grommet.  Then we pushed the grommet into place.  It took quite a bit of force.  Then I soldered the wires back together and added heat shrink tubing and some tape.  It would have been easier to just use wire nuts and just about as good.  Attach power strip to inside of the flip box and test it.

We lowered the sander on to the anchor bolts and securely attached it.  Then we passed the cord through the hole and plugged it into the power strip, tying up the extra slack with a couple of zip ties.

Both of these machines make lots of dust and I didn’t want to dust to fall through the holes into the box with the power strip.  We used two mending plates and 2 grommets to keep out the dust.  Travis drilled a hole in the mending plates and then cut each in half.  We then snipped a grommet on one side to get it around the power cord. Then we squeezed the grommet between the two halves of the mending plate and screwed it into the rotating box.

Attaching the sash latches was as simple as screwing in the catch side, hanging the latch on it and then screwing that in. The latches are attached on opposite corners providing 180 degrees of rotation.

I added a couple of magnetic strips to each side of the rotating box for quick tool storage and to hold parts that I frequently use.

I actually like seeing the many layers of ply in a piece of baltic, so I didn’t edge band. We just went with a simple layer of shellac for the finish.  I wish I had added the finish before assembling the parts though.  It would have been easier.

Follow us on social media using the links below or give us a call. We don’t usually answer calls from unknown numbers so please leave a message or text first.

The only reliable way to get one of my knives is to get on my mailing list, which you can do below. It will give you a head start on the general public, but you’ll still have to pull the trigger quickly if you want to get to it before the other 500 or so folks on the list. We promise no spam, and you can click unsubscribe when the emails we send are no longer relevant to you.